Dorset Sculptor, Jonathan Sells, with his carving of Frank Foley

A wartime bureaucrat who saved thousands of Jews is being immortalised in stone by Corfe Castle sculptor Jonathan Sells.

Read more from The Daily Echo 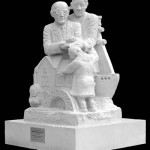