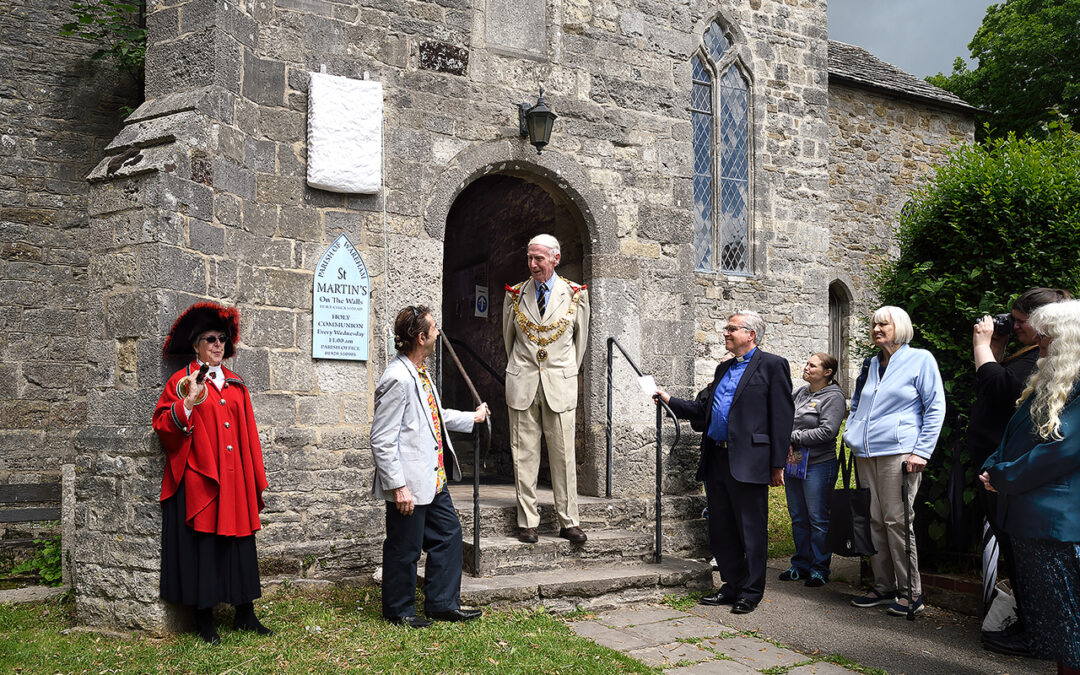 Jonathan Sells and the Mayor of Wareham prepare to unveil the Millennium Plaque at Wareham St Martin’s.

A Millennium Plaque to celebrate the 1000-year anniversary of Wareham’s St Martin on the Walls Church was unveiled on Wednesday 1st June 2022, at 12.00pm at the Church, North Street, Wareham, BH20 4AG. The plaque has been designed and carved by local Sculptor, Jonathan Sells, and depicts the famous story of St Martin cutting his cloak to share with a beggar.

The plaque is carved in Purbeck Stone supplied from W.J Haysom stone quarry, St Aldhelm’s Head, Worth Matravers, Dorset. All are welcome to attend the unveiling and it has great educational value for the community.

St Martin’s Church has stood on the walls witnessing 1000 years of the history of Britain from the time of King Canute. He is reported to have rebuilt the church in 1020 after an earlier place of worship at the site, believed to have been built by St Aldhelm in the 7th century, was destroyed by Vikings.

The millennium anniversary of St Martin’s is therefore an important occasion for the community of Wareham. The idea for the plaque came about when local resident, Malcolm Lewis, who helps run the not-for-profit initiative Art4Action, noticed the little sign on the tower while out on a walk with his family during the first lockdown in 2020. The sign gives the Church’s probable construction date as 1020. He said: “I thought a sign should be erected to mark our fantastic Saxon church’s 1000-year anniversary, so I contacted a member of the Wareham Church of England family about organising it. However, they told me that while they had planned to have a little celebration party that year, there was no budget to pay for a stone plaque.”

So, just before Christmas 2020, through the second of their Art4Action auctions that year, they managed to raise a substantial portion of the funds needed to pay for a plaque, alongside a number of other important causes for the local parish. One of the other causes was to raise funds for the homeless, and the reason for this lies in the history of the Church.

Malcolm Lewis, had previously stated in a 2020 Art4Action article “St Martin would have been very important to the people of Wareham from Saxon times right up until the late Middle Ages, as he was across Europe. So it’s not surprising that our earliest church was dedicated to him. St Martin lived between around AD 316 and 397. When he was a Roman soldier, he one day saw a freezing beggar in the street. He cut his cloak in two, and gave half to the beggar. Afterwards he had a dream that the beggar was actually Jesus, and the experience was life-changing. Martin became a Christian and resigned from the army. He later became Bishop of Tours in France.”

In 1760 Wareham had its own Great Fire, similar in proportion to the great fire of London. It was during this time that St Martin’s Church housed the homeless people of the town for 2 years. 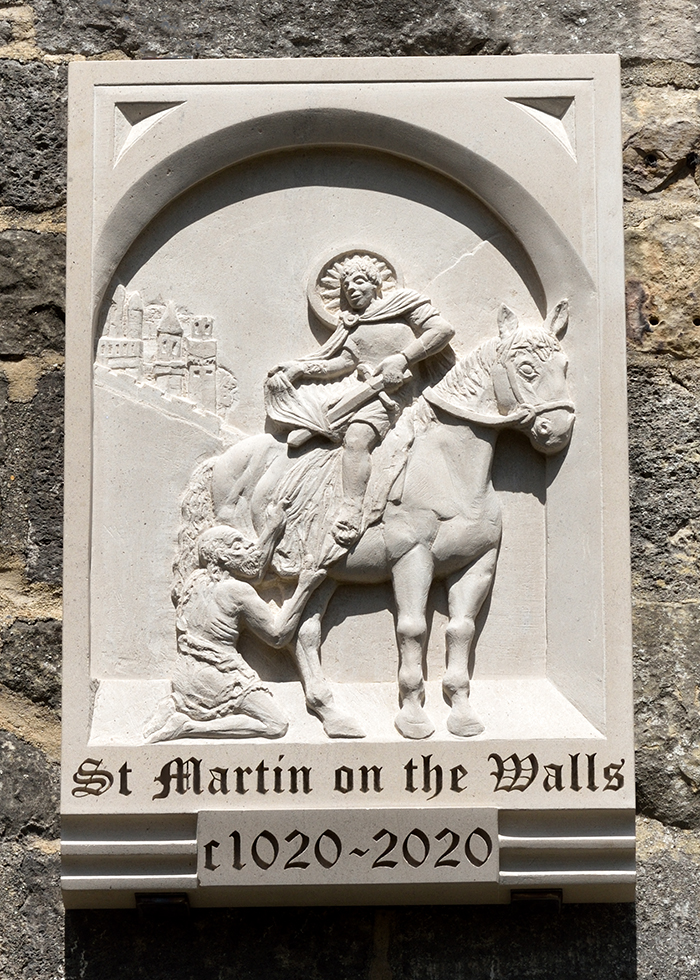 The Sculptor, Jonathan Sells, has lived and worked in Corfe Castle for 35 years. Jonathan has produced a number of public pieces locally and is probably best known in Wareham for his Cottees Auctioneers Statue, created as a double celebration of 700 years of Wareham Market and 100 years of Cottees Auctioneers. He also has public sculptures in Christchurch, in the Priory Gardens; in Bournemouth, outside the BIC, in Plymouth, Somerset (Highbridge) and London (Queen Mary University Hospital).

Jonathan also has an extensive record of teaching Stone Carving and working with disadvantaged groups and those with disabilities. As someone who has lived with cerebral palsy and hearing impairment all his life, he has a passion for helping others to develop their confidence in the creative sphere.

Speaking about his opportunity to design and create the Millennium Plaque for St Martin’s Church, Jonathan said that it was “a great honour to create something to commemorate a church of such importance to Wareham, with such benevolence in its history, both with being named after St Martin, and it’s assistance for the homeless during the Great Fire.” 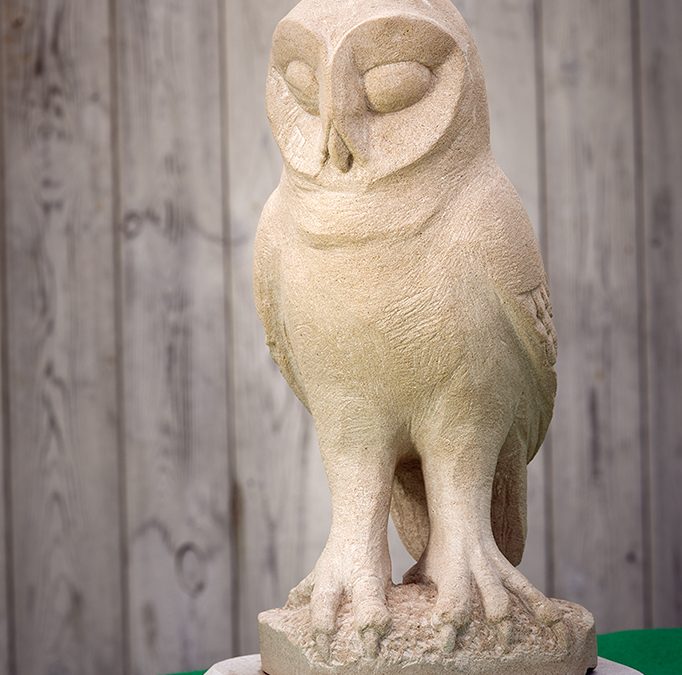 A life-size, stylised, stone barn owl, made to commission and hand-carved in Portland stone by Jonathan Sells. 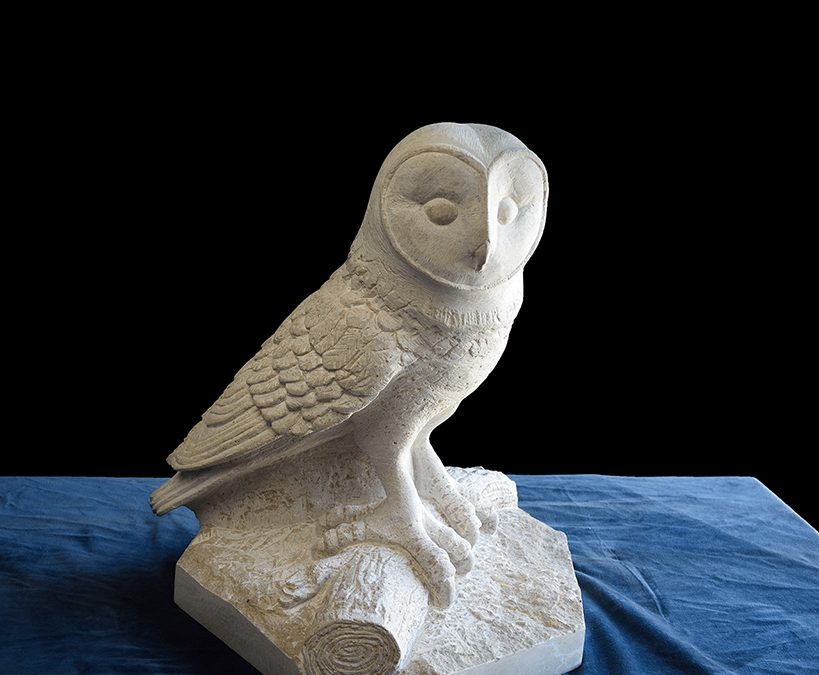 This life-size, beautiful, stone barn owl (Tyto alba) was made to commission, and hand-carved in Purbeck stone by Sculptor Jonathan Sells. 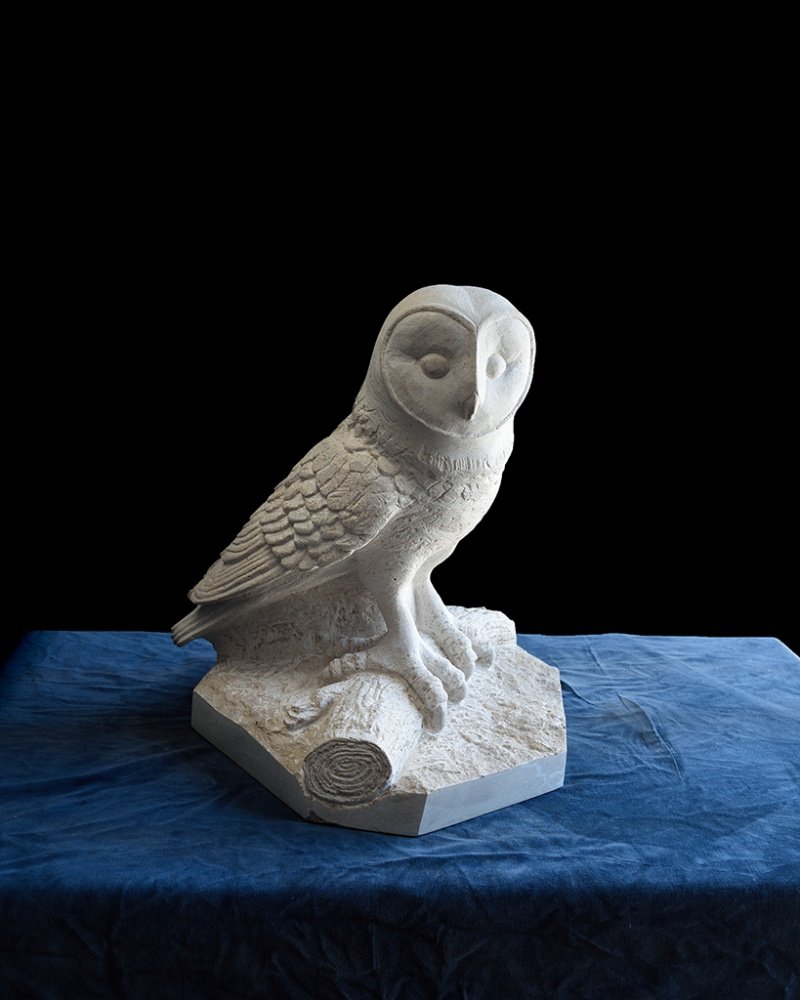 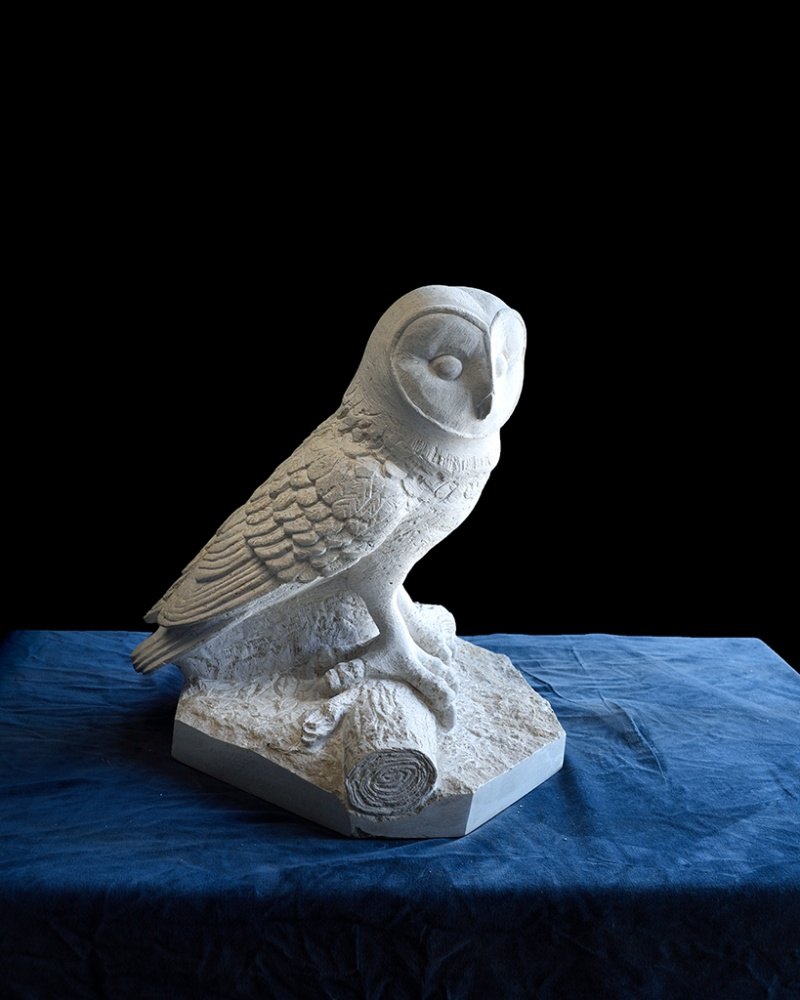 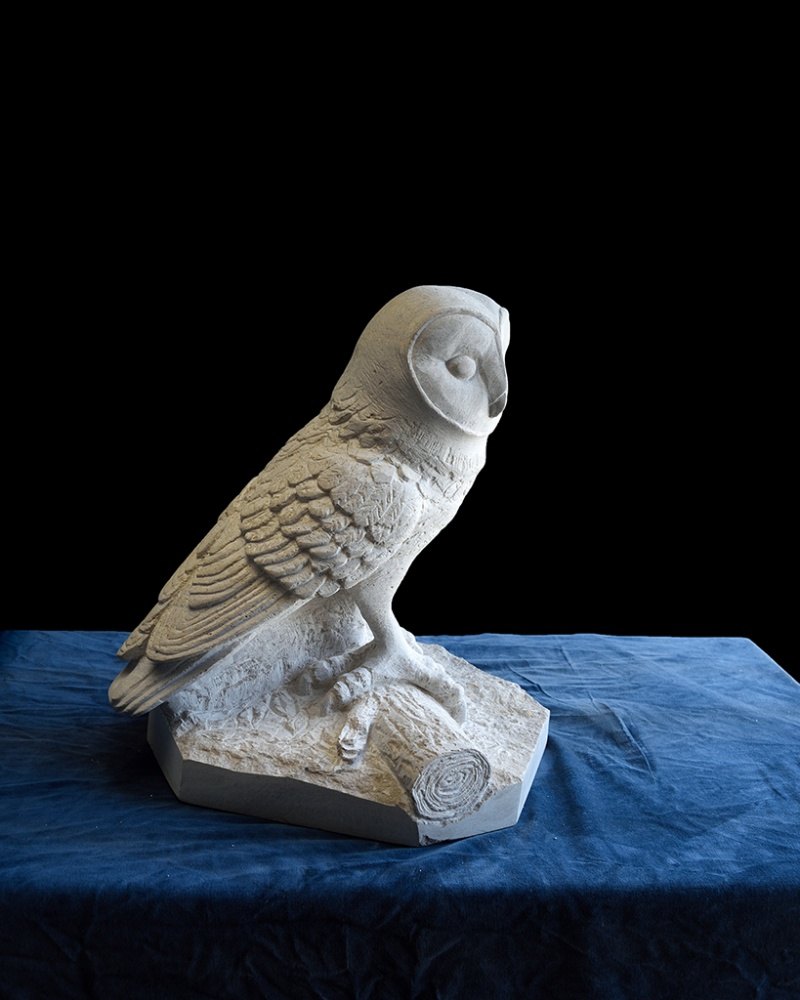 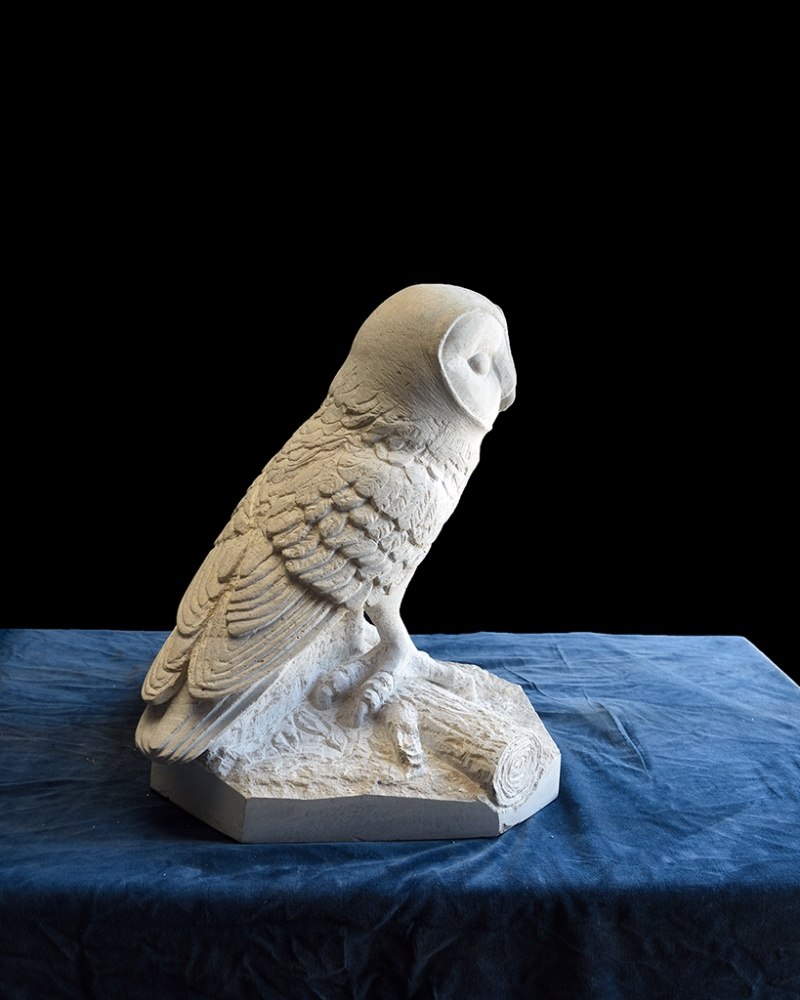 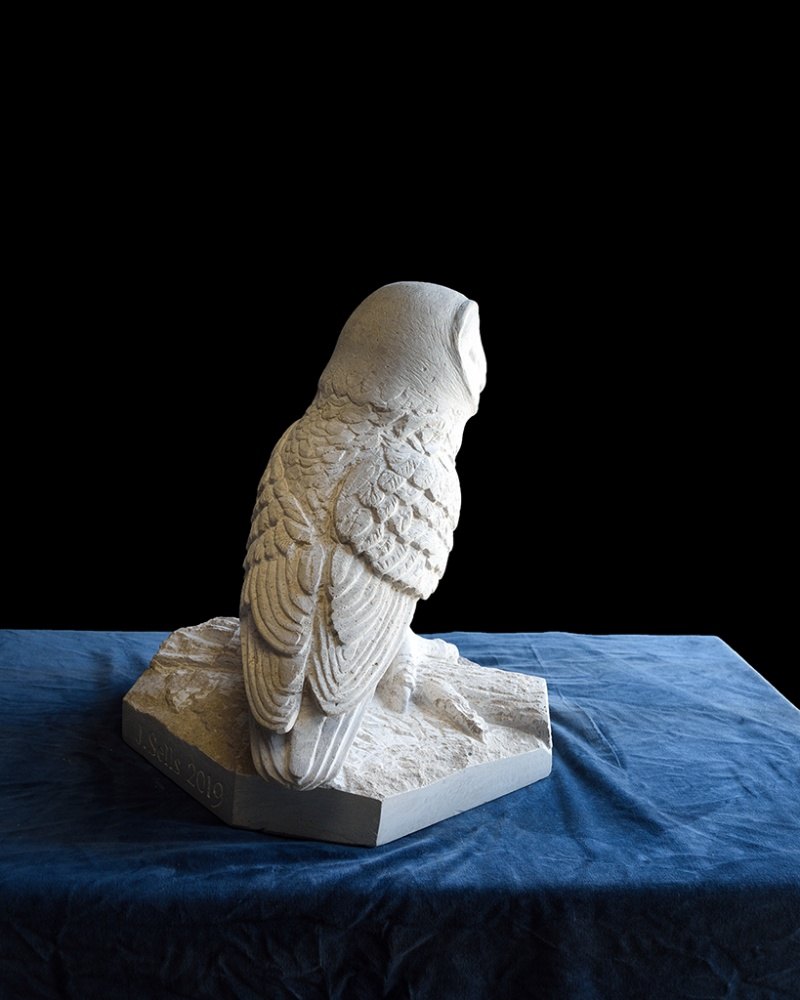 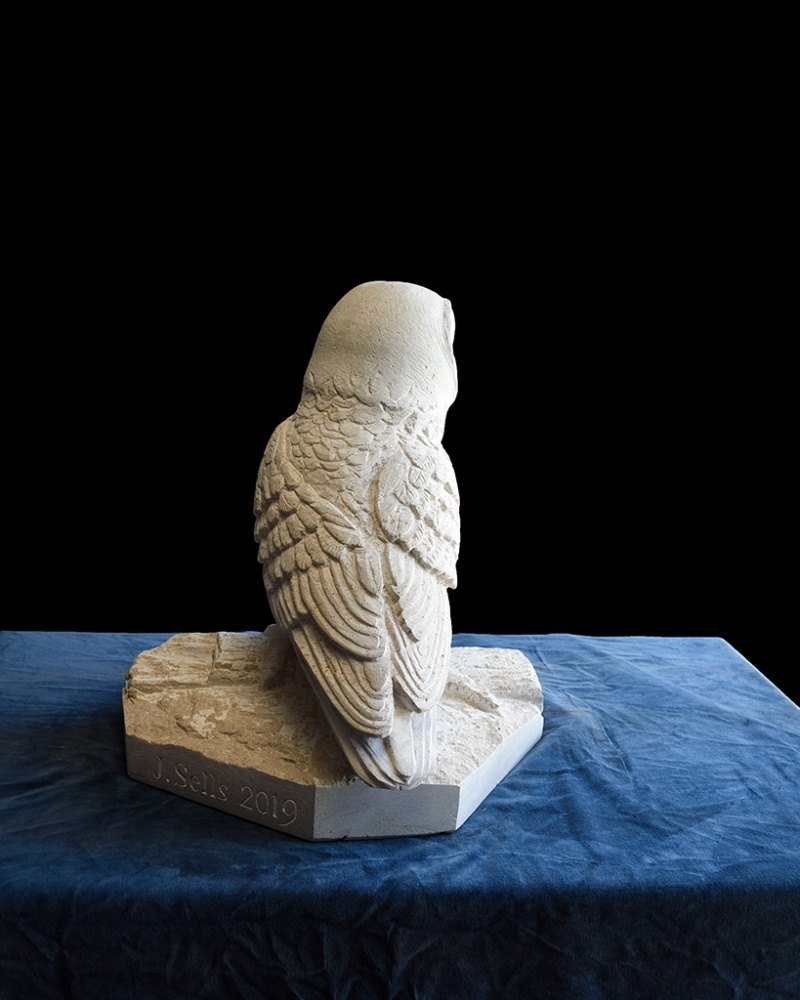 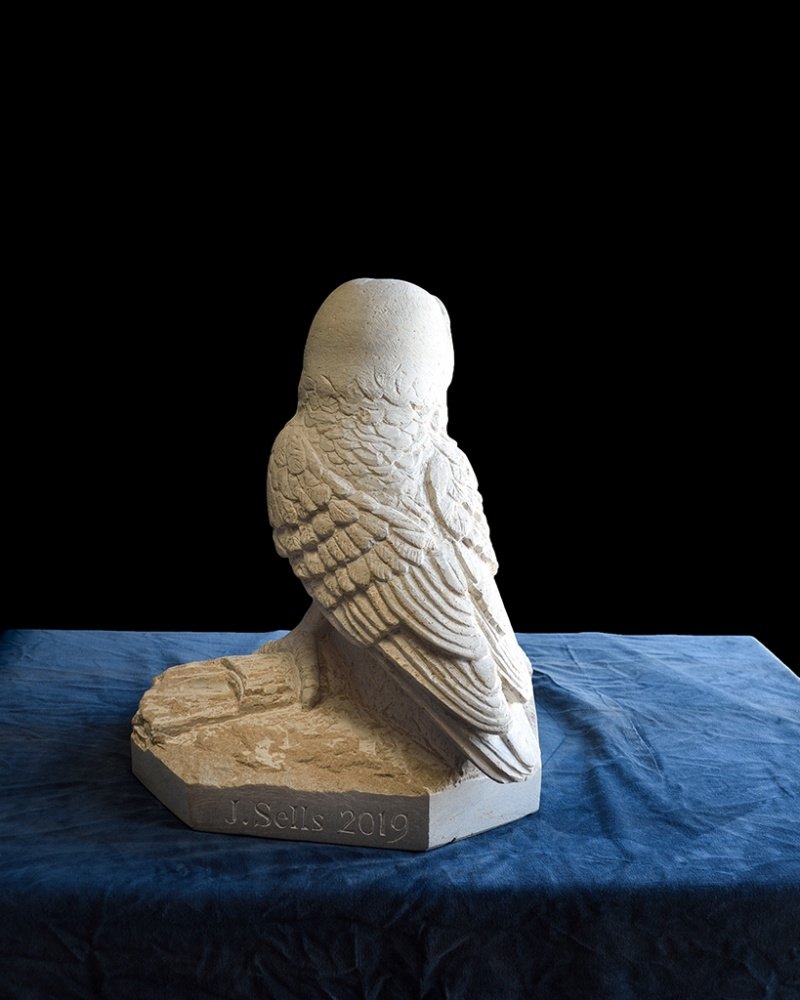 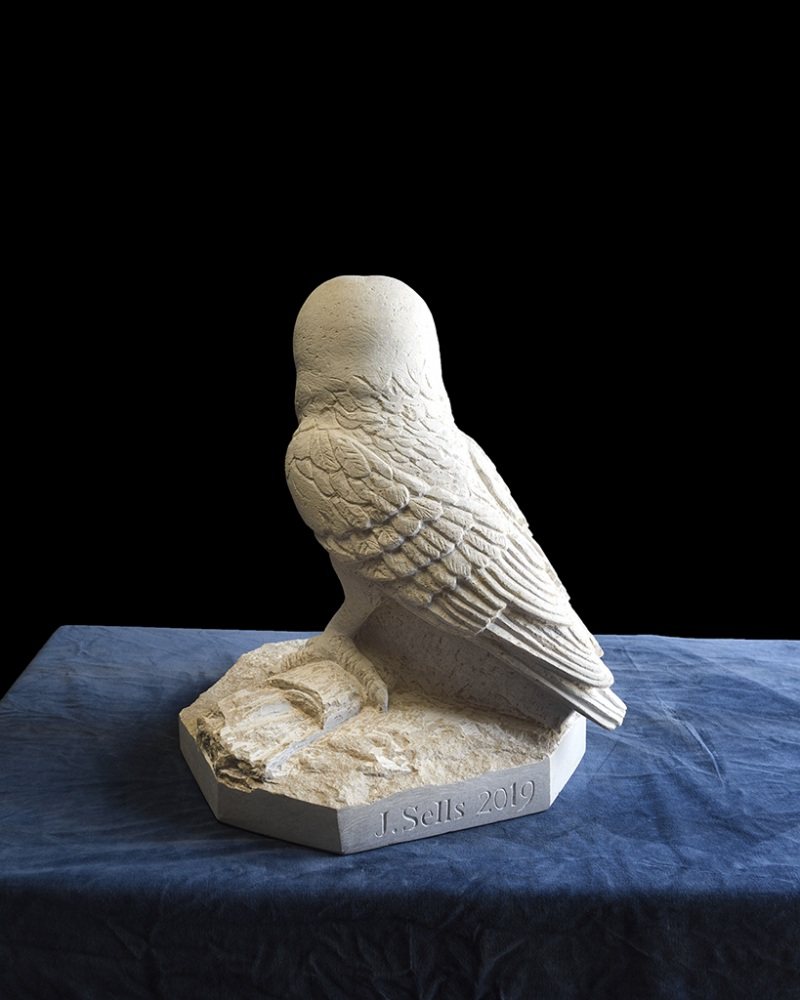 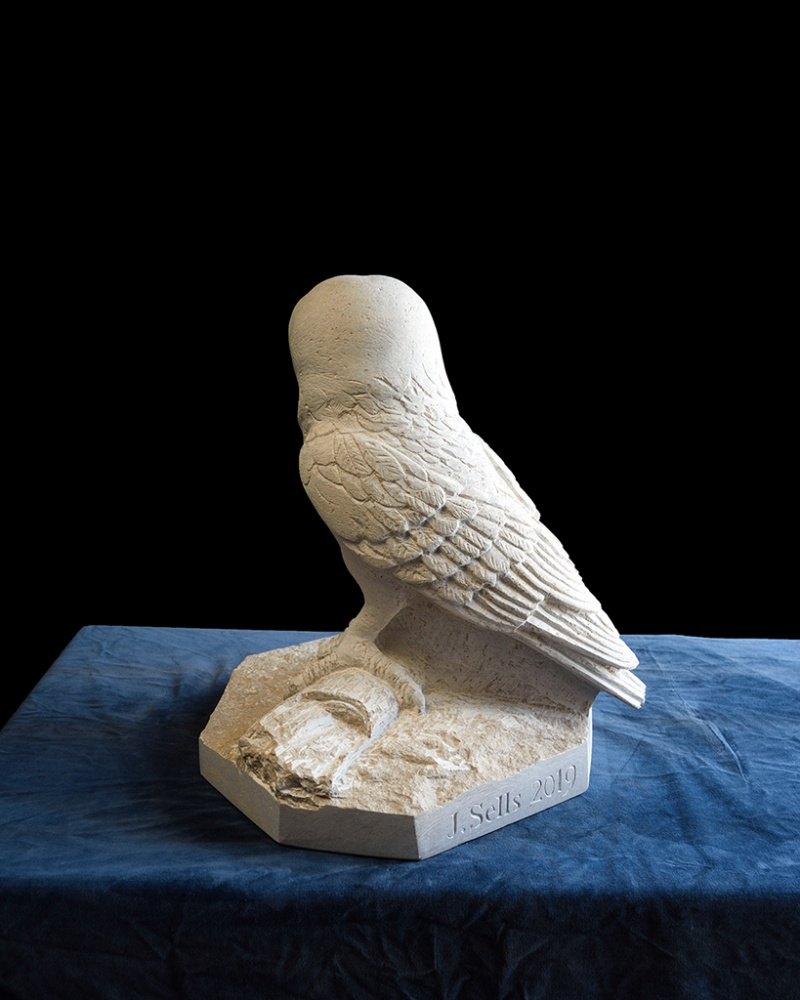 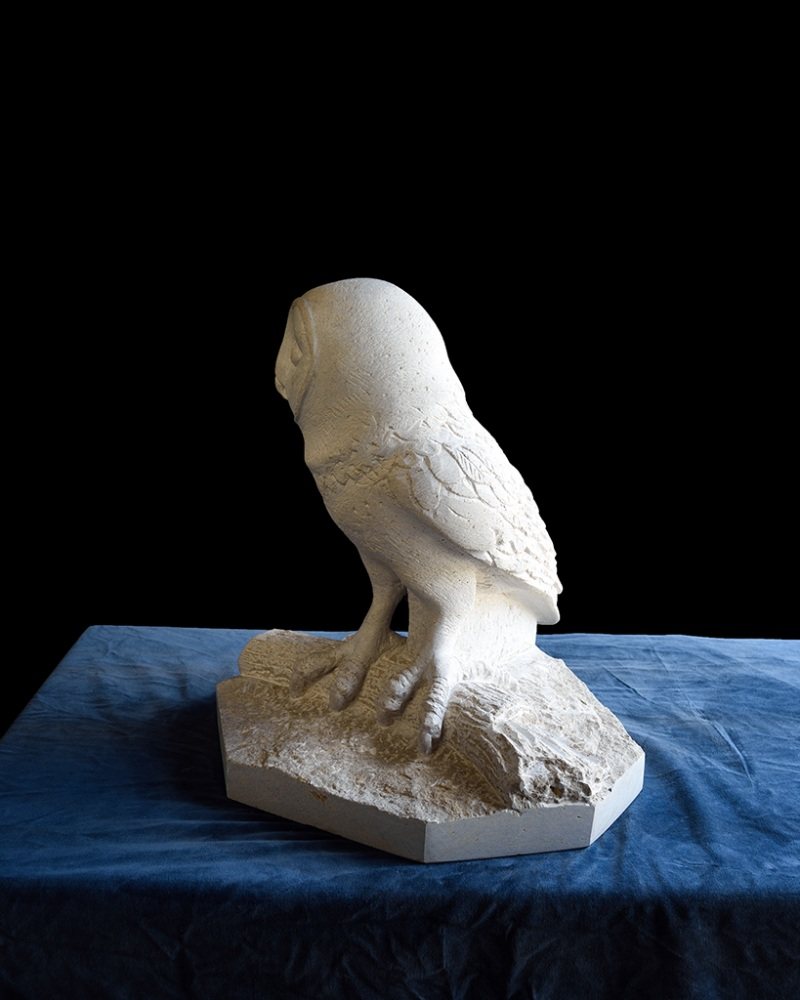 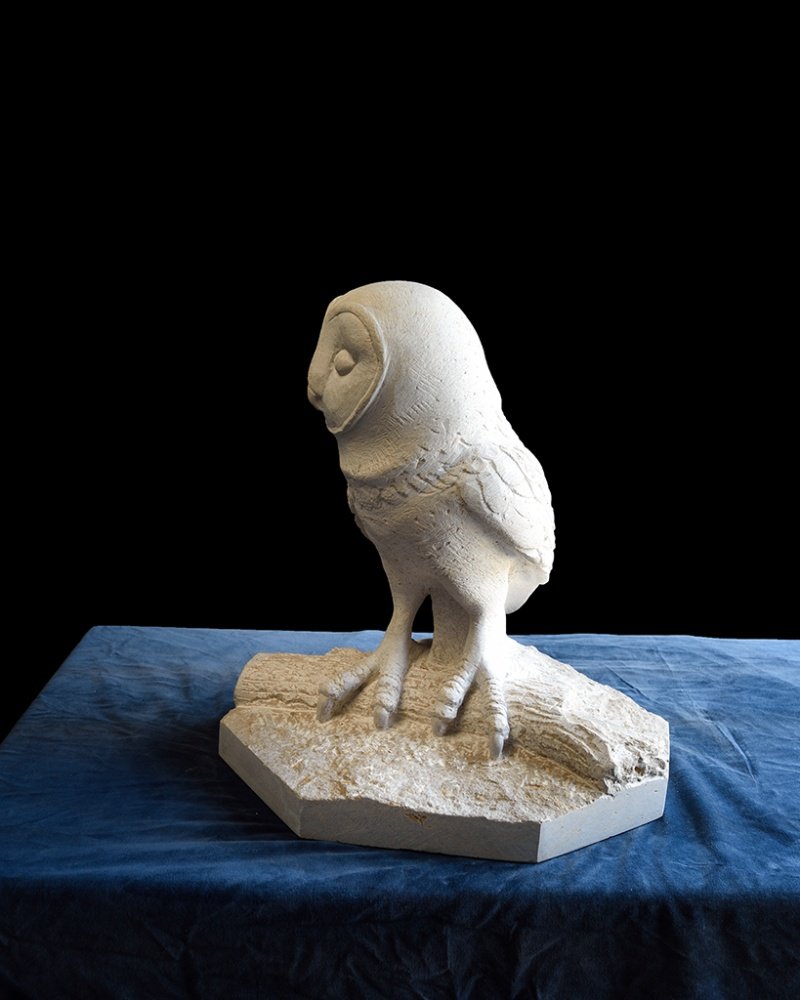 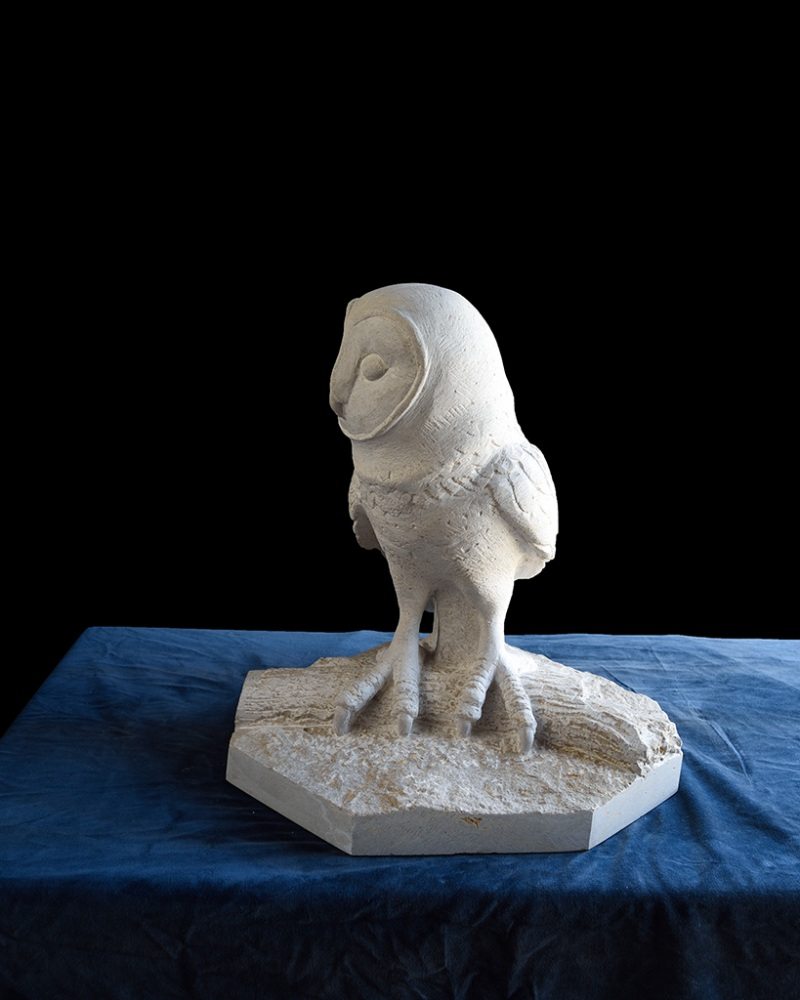 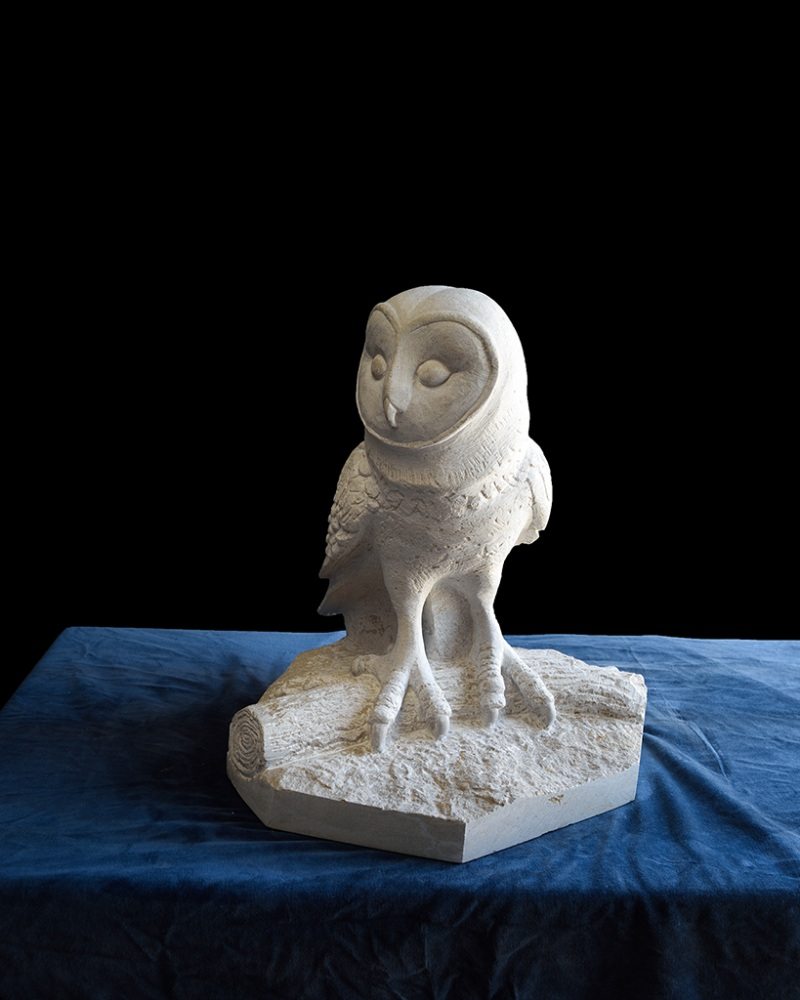 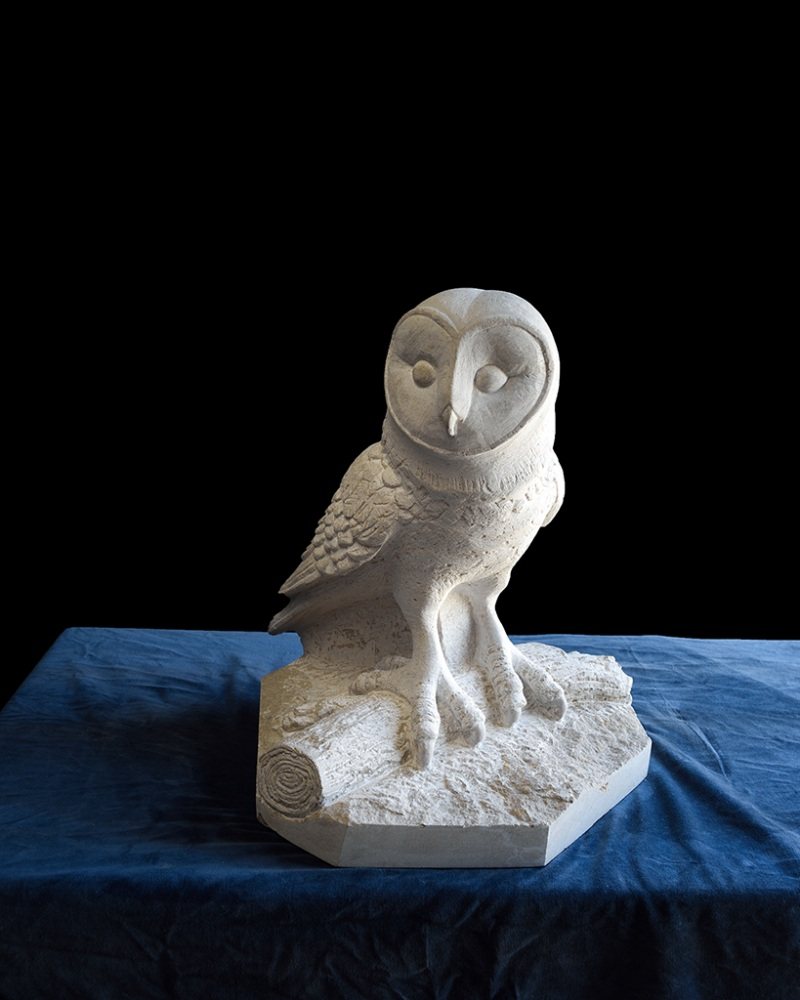 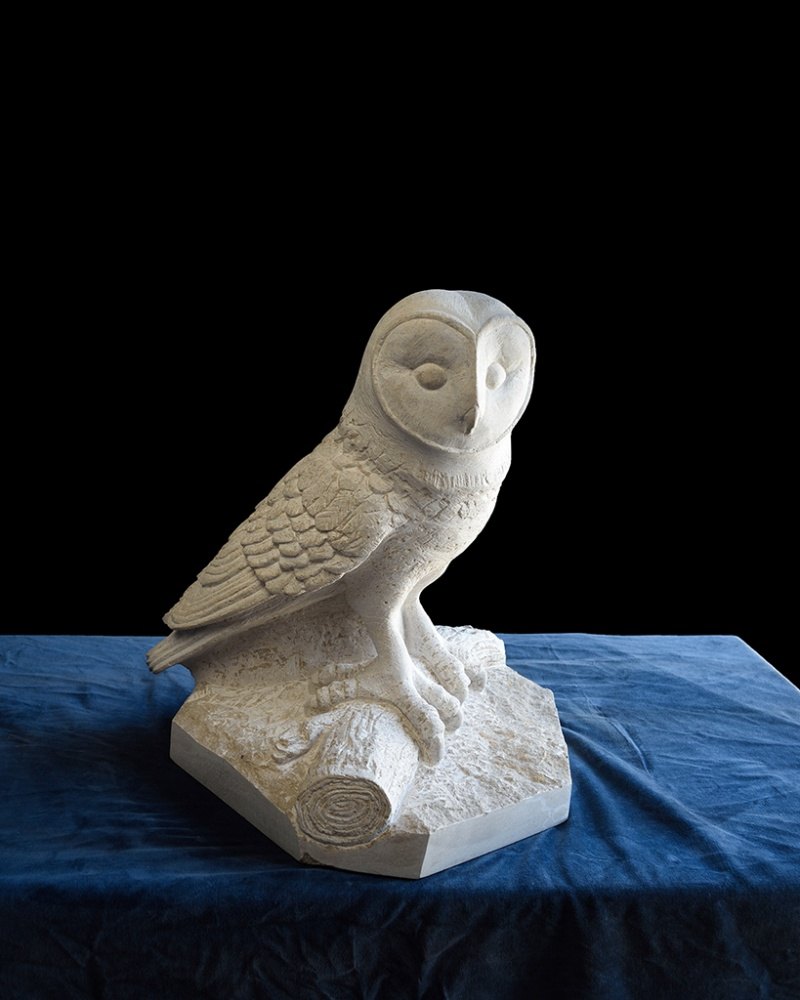 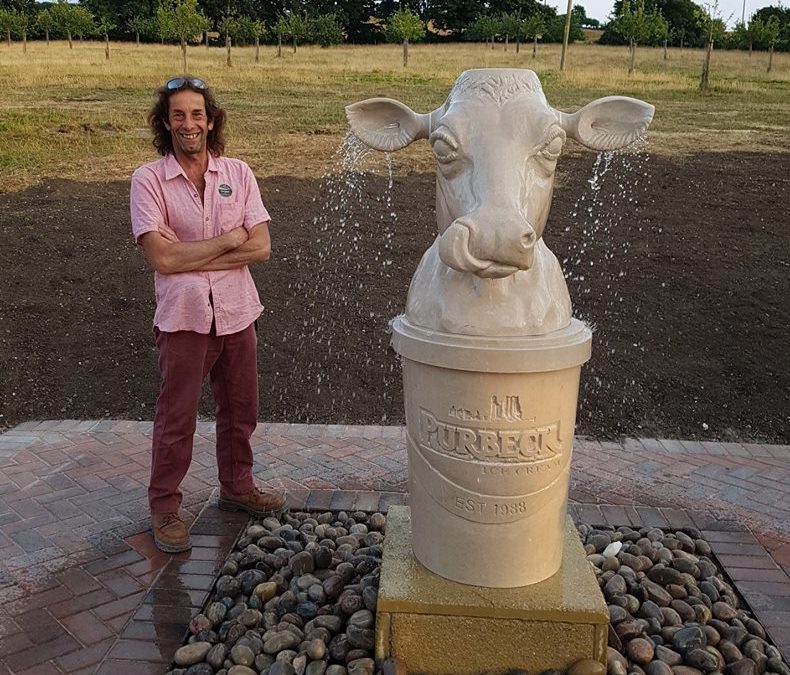 Jonathan has been living ‘Cow’, sleeping ‘Cow’ and breathing ‘Cow’ for, well he doesn’t do normal hours, but, for months……….

She was worth it! He did one 31 hour stretch of work and, as it came to completion, a 37 hour stretch.  He  didn’t want to let her go until she moo’d and fluttered her eye lashes!

“We are delighted to celebrate 30 years with Jonathan’s creation. It is going to take pride of place in our new ‘Tranquil Garden.”

Many thanks to the Purbeck Ice Cream company for this wonderful commission of a Purbeck stone cow fountain carving, created to celebrate their 30 years in business. 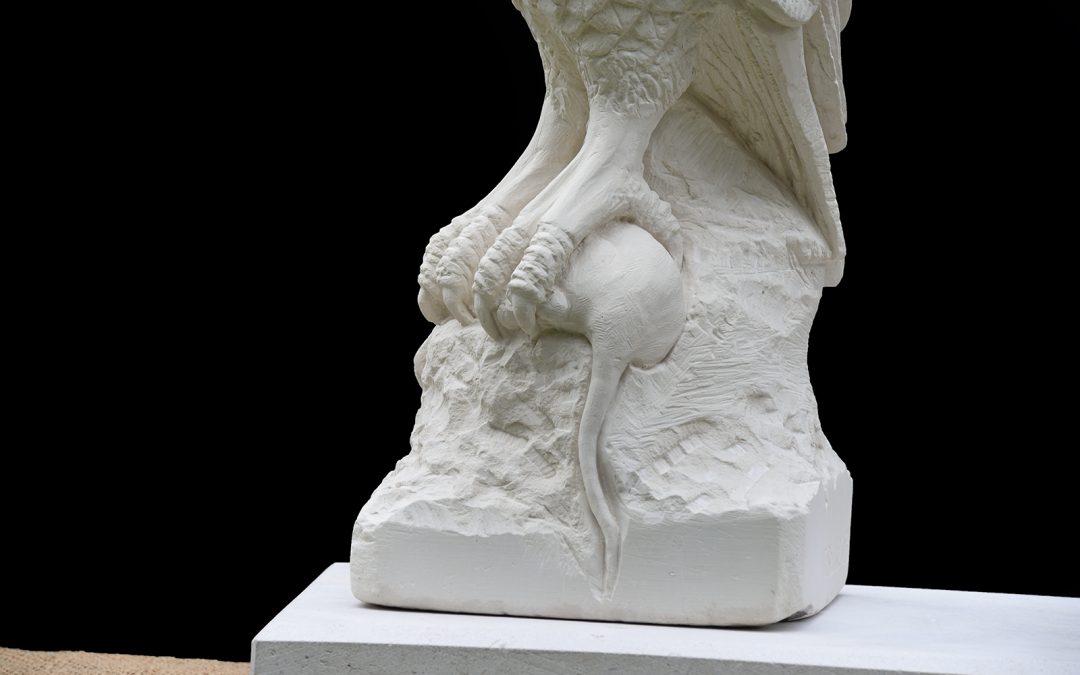 This life-size, beautiful, stone barn owl (Tyto alba) was made to commission, and hand-carved in Caen stone by Sculptor Jonathan Sells. You can see that it has caught a rat!

Jonathan is currently working on several new projects, including stone carved house signs (stone lettering), a hand carved in Italian marble, and a barn own from Purbeck stone.